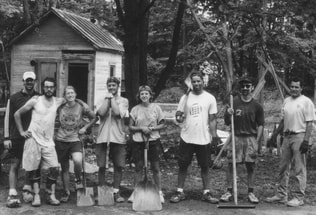 In 1995, Yellow Springs Village Council adopted the provision of affordable housing as a public goal at the urging of local citizens concerned about the effects of rising housing costs.  In that year, two members of Council and a member of the Miami Township Trustees applied for and received a charter from the State for an organization called 'Yellow Springs Home Incorporated' for the general purpose of promoting diversity and affordable housing in the Village.

By 1997, the Village appointed an Affordable Housing Task Force to work on a plan to develop affordable housing. Discussions began rega﻿rding a controversial Glass Farm project on a 15 acre portion of Village-owned land. More than 1 million dollars were secured for the project, which ultimately did not materialize. Community members did not give up their dedicated efforts to bring affordable housing to Yellow Springs despite the challenges they faced.

In 1998, Yellow Springs Home, Inc. was formed by an all-volunteer board as a Community Land Trust (CLT).  Using the original charter, the board created a non-profit CLT. The CLT model was selected because of its balance of creating individual and community assets, and because it keeps homes affordable over time. The CLT model also has roots in Yellow Springs.

In 2000, the "Let's Build a House Campaign" was launched with substantial volunteer labor and grassroots fundraising on what would become Home, Inc.'s first affordable house. The home was located on N. High St., the historic former Ensley house. In addition, Home Inc. was awarded a start-up grant from﻿ the Institute for Community Economics (ICE). Since then Home, Inc. has been hard at work creating affordable housing opportunities throughout the Village of Yellow Springs. 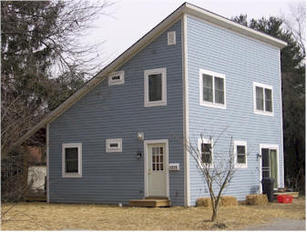 In 2001, a second attempt to develop the Glass Farm was undertaken by the all-volunteer board of Home, Inc. with a proposal to develop 7 acres. The board secured grants for the project from the Ohio Community Development Finance Fund and the Greene County Department of Development. The project did not move forward after being voted down despite a lengthy public education campaign. Again, volunteer community members did not give up their efforts to bring affordable housing to the Village. At this time, Home, Inc. also began a successful, lengthy process to make the CLT ground lease eligible for the USDA Rural Development loan program, which benefits under-served rural homebuyers.

By 2002, Marianne MacQueen was hired as agency’s first part-time Executive Director, after the agency became a state certified Community Housing Development Organization (CHDO) by the Ohio Housing Finance Agency (OHFA). Andrew Kline, an Antioch College co-op student, was the agency's first paid staff member and helped to secure the certification. A second home was donated and rehabbed on W. Center College Street, the former Fran Hurie home, donated by long-term resident Suzanne Clauser, in memory of her husband Charlie Clauser. The home was rehabbed in 2003 and sold using a Rural Development mortgage.

In 2004, after two years of searching, enough property was located for purchase to apply to OHFA for a Housing Development Assistance (HDAP) grant. The Village Council submitted a letter of support for the project. The grant was approved.

From 2005-2008, 10 homes were built or rehabbed and sold to under-served home buyers in partnership with the Ohio Housing Finance Agency; six newly constructed in the Thistle Creek planned unit development, and four scattered site homes in Village neighborhoods. The homes were completed and sold before the housing crisis.

In 2007, Home, Inc. had its first resale of a home using the CLT resale formula. Two additional homes were resold the following year. The homes needed no additional subsidy to stay affordable to the next low-income home buyers, while the sellers walked away with equity and moved on to market rate home ownership. The model works!

In 2008, Home, Inc. developed its first rental investment property as a result of a successful capital campaign. A cottage on Xenia Avenue was purchased from the Morgan Family Foundation and rehabbed with capital campaign funds from local donors. Rentals generate income to further the mission and provide sustainability while also meeting a need in the Village for quality rentals affordable to low-income households. Home, Inc. also conducted pre-development activities on the 13-acre Rabbit Run Farm, which Home, Inc. determined not to proceed with after due diligence was performed. 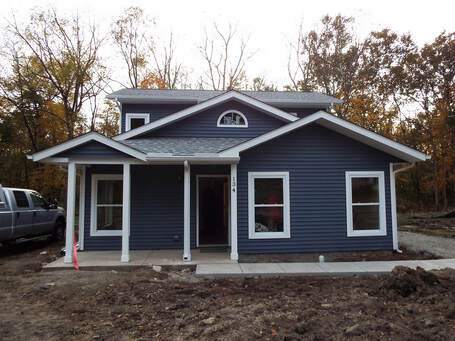 In 2009 and 2010, Home, Inc. constructed and sold an energy efficient home in the Stancliff development. The land was donated by an anonymous donor. Home, Inc. acquired funds to purchase a West Davis Street property from HUD, which housed an abandoned, foreclosed home. The blighted home was later demolished.

A township-wide visioning in 2010 also resulted in citizens identifying affordable housing as a top public goal. The development of a stewardship program was also added to strategic plans in 2010, which  encompass pre- and post-purchase services to support homeowners to be successful and maintain their assets over time. These services greatly reduce the risk of foreclosure for CLT homeowners when compared with traditional mortgages.

From 2011-2013, Home, Inc. completed the West Davis Street homes, featuring the first fully wheelchair accessible home in its portfolio. A grant was awarded through the Ohio Community Development Finance Fund to develop highly energy efficient blueprints. Home, Inc. was also successful in getting the CLT ground lease approved for Veterans Affairs guaranteed mortgages and served its first Veteran household. The homes were tested to use approximately half of the energy of conventional homes.

Home, Inc. also applied for its first Low Income Housing Tax Credit (LIHTC) grant through OHFA for a 33-unit senior housing project, narrowly missing funding in partnership with Buckeye Community Hope Foundation. $250,000 was secured from the Morgan Family Foundation, contingent on a LIHTC award, to make the project mixed-income, and local fees were waived by the Village Council. A Senior Housing Working Group is currently leading efforts to locate another site.

A large corner lot was donated by long-time Village resident Jane Baker on the corner of Dayton and King Streets. A Moving Ohio Forward grant from the Greene County Department of Development provided funds to prepare the site for future development. A new zoning code was also established for the Village, which provides incentives for affordable housing development, greater in-fill density, and more options for building small homes. Home, Inc. also commissioned an Artist Live-Work Lofts feasibility study with Wright State University, which showed demand for the project.

In 2014, Home, Inc. formalized its Homebuyer Coaching Services program, funded through the Yellow Springs Community Foundation. More than 40 households were served through the program. Home, Inc. also broke ground on the Cemetery Street project, which will result in four newly constructed homes. The project is in partnership with the Village of Yellow Springs, which is selling lots at half-cost, waiving fees, and installing a new water line to accommodate the development and provide for increased fire safety with hydrant access. Village Council unanimously supported the project. To learn more about the project, visit the housing program page. ​

In 2015, Home, Inc. celebrated as it purchased its 20th home at auction for just over $75,000. Home, Inc. also completed phase one of its $760,000 4-unit Cemetery Street homeownership project. More than $260,000 in gap funding was committed to make - and keep- the Community Land Trust homes affordable. 2015 was a busy year as Home, Inc. continued strengthening its homebuyer coaching program while expanding post-purchase support. As of 2015, stewardship services were made available to 80 households enrolled in the program. The Development Coordinator position was added in 2015, when the need for additional staff capacity in fundraising and real estate development was needed.

In 2016, Home, Inc. turned its attention to the growing need for affordable rental housing. Home, Inc. became eligible to package low-interest mortgage loans through the USDA's Rural Development 502-Direct program, which allows our clients to pursue additional affordable homeownership opportunities.  Additionally, plans for six apartments to serve low-income seniors and persons with special needs were put into place.  In October of 2016, the four-unit homeownership project on Cemetery Street was completed and two additional existing homes were rehabbed, providing for more than $500,000 in development and housing for 12 local children and their families.

In 2018, Home, Inc. facilitated two re-sales of permanently affordable for-sale housing to homebuyers of low-income in Yellow Springs and began construction on the six-unit Forest Village Homes pilot rental project, serving seniors and persons with special needs including developmental disabilities. A successful capital campaign was launched to provide permanent affordability in the 12-unit Glen Cottages Pocket Neighborhood alongside sustained predevelopment capacity and an opportunity fund. Home, Inc. also purchased 1.8 acres between Herman and Marshall streets through a Program Related Investment by way of the Morgan Family Foundation and began plans for a 54-unit senior apartments project in partnership with St. Mary Development. Home, Inc. became the first rural Enterprise Community Partner in the state of Ohio.

More than 125 households received client-first programming including homebuyer coaching, rental service coordination, repair grants, post-purchase support, in-house mortgage packaging, and individualized financial coaching. Home, Inc. has not had a single foreclosure since founding, while more than $5,000,000 has been invited in permanently affordable housing in Yellow Springs since founding, building lasting community wealth. A new full-time staff position was added, an Outreach and Fundraising Manager to advance community outreach, engage in coalition building, and further affirmative marketing and outreach efforts. More than $70,000 was generated by the Home, Inc. portfolio in 2019 alone in property tax revenue to support the local schools and Village services.

Home, Inc. did complete fundraising and broke ground on its biggest project to date, a 12-unit, mixed-income pocket neighborhood development featuring an inclusive, pedestrian-focused community design, a shared commons, and graduating layers of privacy for both homeowners and renters. This $2.25 million, infill project was supported by the Village of Yellow Springs, the Ohio Housing Finance Agency, donors to the 20th Anniversary Capital Campaign, the Federal Home Loan Bank of Cincinnati, the Finance Fund, the Huntington National Bank, homebuyer equity, and the Ohio Department of Developmental Disabilities. Currently more than 250 households are on the Home, Inc. waiting and interest lists. 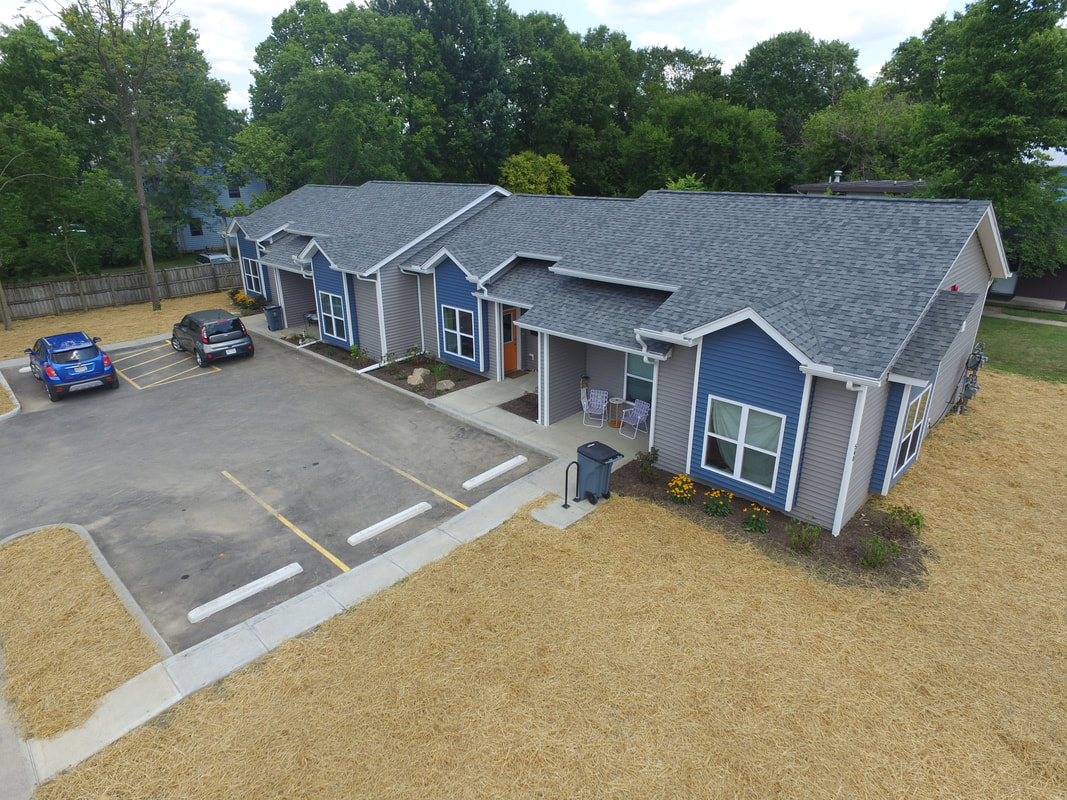